Roger Cross, who played Agent Curtis Manning for 2 full seasons on 24, wasn’t always in the acting business. In fact, Cross actually had a career as a commercial pilot before he realized that acting couldn’t just be his hobby. 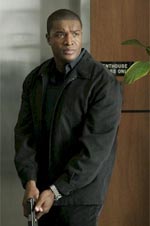 Though Cross says that he knew about the plan to kill off  Agent Manning this season, his death was a complete shock to fans.  Cross took time from his busy schedule to talk to BuddyTV about kicking butt in the January cold, working with an amazing cast, and going out in style.

BuddyTV: Looking back at the start of your career, it looked like it was an interesting way into the acting business.  Can you give us a rundown on how you broke into the business?

Roger:  I did stunt work, actually, on 21 Jump Street, a long time ago.  And it was just more out of curiosity and just for fun, I think.  I did acting school for just for fun, enjoyed doing it but didn’t think of it as a career you know; no one’s an actor for real.  That’s not how I thought of things.  I was a commercial pilot and so for me, that was a real career and this was just a side thing while a flying job came along. And, slowly but surely, I went to China and did a movie and it just started taking over my life.  It just felt like the right fit and I just kept doing it.  That’s the thing, you go on making all these grand plans, you’re going to do this by this age and you’re going to that by that age and I don’t know if you did that, but a lot of people tend to do it.  And then, you know life throws you a few wrinkles and I’ve just discovered you’ve got to go with it.

Can you tell us how you got the role of Curtis Manning on 24?

Basically I got a phone call from my agency and they were like “Oh, have you heard of 24?”  And I’m like, “Of course, I love the show.”  And they were like, “Well, would you like to go in for a role on it?” I’m like, “Yeah, that’d be great.”  So I went in and did the initial audition and I was just about to actually leave to go up to Vancouver, BC to go shoot a series called The Days, to do a guest spot on that and I thought okay and I got on a flight to go an do the show.  While I was shooting it they were like, “Oh they really loved what you did and the producers, they need to see you, you need to get approval from the rest of the producers and things like that.”  And I’m like, “Okay, well I only have one day off next week.”  And they were like, “Okay great, we’ll put you on a plane!”  So they put me on a plane, I flew back in and met with the rest of the group.  The first time it was just with Joel Surnow and with the casting people, things like that, because when it came down to it he was the man who made the decision anyway.  So then after that, I got back on the plane that evening and flew back up to Vancouver; the next day I started getting some phone calls going, “Hey, they really liked you, if you’d like to be a part of it they’d really like to have you.” And I’m like, “Heck yes!” So then, there we go.

How long were you originally slated to be on 24?  Did you know?

Initially they said it was going to be a six-part arc, which is what they had envisioned for it.  And then part way through the first episode they started talking, “Well, maybe we’ll do a little longer deal.”  So I was like, “Okay, let’s do a longer deal.”  So then they went ahead and did their thing and that’s how it worked out.

You know, you worked pretty closely with Kiefer Sutherland the whole time on 24.  How was that experience?  For viewers, it seems like he’d be a pretty intense dude to work with.

He’s an intense dude but he also knows how to, you know, let the hair down and have a good time when he can.  He can be very intense but he’s also a lot of fun when he gets a chance.  So it’s all good.  I mean that’s the thing, people think that filming that show must be always intense.  But it’s like, no, we love to crack up and have a good time just like anybody else.  And think about it, if we were that intense all the time it’d be a pretty miserable place to work.

Shooting all that stuff in the field, it looks like it would be a whole lot of fun.  Was it fun or was it also pretty demanding?

All the action stuff?  It’s both.  I mean anything in life worth doing is sometimes a little bit more challenging than others.  And it was a lot of fun in that I like doing physical action.  And then of course you get the great acting with it, you get the stories with it and so it’s just the best of all worlds.  And it can be demanding because we shoot and because of the time restraints that we have.  When we shoot exterior nights we have to actually shoot at night; exterior days we have to shoot during the day.  So you know, in the middle of January, we’ll be shooting all night.  So at five o’clock in the morning when all of a sudden you’ve got to be up and kicking but and doing your whole thing, it’s not so much fun.  And then it’s freezing cold.  You know we go from extreme summer heat in the middle of Chatsworth to the extreme cold of January in the middle of the night somewhere downtown with helicopters flying over you, the whole bit.  It’s pretty wild but it can be challenging.

See also '24: Live Another Day' Recap: Lives Hang in the Balance After Another Drone Strike

Shooting in CTU and shooting in the field must have really distinctly different vibes.  Which did you prefer?

You know, there were days, like I said, in the middle of winter, where it’s freezing out there and you’re like, “God I want to be back in CTU.”  But then there are day jobs and being out in the field is just a lot more fun.  It’s a little bit of both.  What it is more about, especially when I first started, we had a great group: myself, Louis Lombardi, Lana Parrilla, Alberta Watson, had all started at the same time.  And we just had great chemistry.  It was just one of those situations where we all came there together.  You know this show had been going for three years but we were the new kids on the block and we really enjoyed each other’s company and we hung out a lot.  It was a nice transition because it wasn’t like I was the only one coming into an already established show; it was a group of us that came in together and hey, coincidentally that’s the year that the ratings really took off!

Do you have any favorite moments of any episodes you shot for 24?

I still love the fight sequences up in the office building when I make my escape.  I still love that scene; that was a lot of fun for me.

Coming into this season, Season 6, did you have any sort of idea that you were going to be killed off?

(laughs)  You know at the end of last year, I asked them what the plans were for the character.  Because there were times where you know my character wasn’t doing a whole lot and it was kind of like well, do we have greater plans for him and what’s going to happen? And we discussed it, my management discussed it with them to see what they were talking about, was going to happen, just sort of where to take the character and things like that.  We kind of together said, well if you’re going to let him go out, what kind of death scene would it be?  So I had a pretty good inkling that they were going to use it for a dramatic moment.

When did you find out for sure?

Were you happy with the way Curtis went out?  It was a pretty dramatic scene.

It was very dramatic and I enjoyed the day shooting it.  It was very nice and working with that group that we have there it just made it.  It was hard because I’d worked with these guys for over two years and we all hang out.  We’re all friends and so to be filming like the final scene was kind of a strange feeling.  But it was also very well written.  I enjoyed it.  Yes, I’ve heard all the controversy that Curtis wouldn’t have done that but I’m like, “Yeah, but you know what, he did.”  And it was a good run and it was a lot of fun.

When I watched that episode with a group of friends there were physical reactions to Curtis getting shot, it was just brutal.  Everyone was like, “No! No!”  What do you think it was about the character that made you get that sort of reaction out of fans?

I think you’d answer that better than I would. You know what I mean? I think you, the person watching it who has invested time in it, would probably answer it better than me.  The thing about any character I would do, he’d have to have his strengths but he’d also have to have his vulnerabilities.   And basically be real because everyone, you have your strengths, you have your weaknesses, you have your moments where you’re not going to be stellar but you also have your moments where you’re going to be strong.  And he was able to do that, I believe, and so I think maybe the audience appreciated that and yes, he could kick some ass but he also had a softer side and he was also very loyal I think, so those are the traits I think people liked about him.

Can you talk a little bit about what you have coming up?

Man, I wish I could tell you that. There’s been some crazy things happening with some deals that we thought were signed and didn’t happen but there are some very promising things.  I mean, now that I’m, I guess, stepping up to another level, the competition of course gets stiffer and now I’m up against some of the bigger names in the business for some of the same roles, which is what you work for.  So right now we are waiting for a lead in a movie, that I can’t tell you right now, but hopefully within the next week I’ll be able to tell you exactly what I’ll be doing.