For years, the Emmy Awards have ignored Battlestar Galactica, the critically adored and cult favorite from the Sci-Fi Channel. This year, BSG fans could rejoice in two major nominations for Outstanding Writing and Direction in a Drama Series. The terrific cast may be left waiting, but this is nothing to sneeze at. 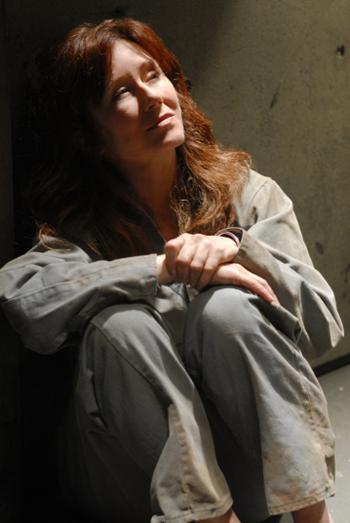 The miniseries and first two seasons of Battlestar Galactica picked up eight Emmy nominations, but only for its special effects and editing, and they did not result in any wins. Fans may find this difficult to believe, given some of the brilliant effects work the BSG team has provided

Finally, the show has broken through a little bit, which is all its supporters can ask for. The Writing nom is for the third season two-part premiere, “Occupation/Precipice.” Written by show creator Ronad D. Moore, the episode centers on the refugees on New Caprica battling the Cylon occupation. The episodes deal with such topical issues as suicide bombings, freedom fighters, and torture, important subjects in today’s world, and the episode drew many comparisons to the present-day Iraq War. Moore was nominated for a Writers Guild of America Award for the episodes earlier this year.

Unfortunately, the show’s competition is stiff. The mind-blowing Lost finale “Through the Looking Glass” is also in its category, along with three episodes of The Sopranos, including the much talked about finale, “Made in America.” If you want odds on BSG‘s chances, take note that in five of the six previous years The Sopranos has been at the Emmys, it’s won this award.

The Direction nomination went to Felix Alcala for “Exodus, Part II,” the memorable episode in which the heroes flee New Caprica, full of action and impressive visual effects, culminating in the sacrifice of the Battlestar Pegasus. The episode, named the single best episode of television in 2006 by TheFutonCritic.com, was also nominated for Sound Editing and Special Effects.

This category is crowded, with six other nominees. The Lost finale also shows up here, as does an episode of The Sopranos and “Son of the Defender” from the Emmy shocker of the day, Boston Legal. Its other competition comes from three pilot episodes of new NBC shows: Heroes, Friday Night Lights, and Studio 60 on the Sunset Strip. In the last three years, this award was won twice by pilot episodes (Lost and Deadwood). The one to watch out for would be Studio 60’s director Thomas Schlamme. He has previously won Emmys for directing the pilot episodes of Sports Night and The West Wing, the two other shows Aaron Sorkin has created.

While Writing and Direction nominations may not seem like huge recognition, they are the only technical awards handed out at the primetime Emmy ceremony, and not at the Creative Arts ceremony held the week before. Viewers across the world will hear Battlestar Galactica mentioned in the same breath as some of the most popular shows on TV. The Writing category is also where some other critically beloved shows received their only major Emmy recognition. Buffy, the Vampire Slayer and HBO’s The Wire each were nominated in this category.

BSG fans and supporters have been screaming, wondering when their big break would come. Could Edward James Olmos get a Screen Actors Guild Award nomination, or would Katee Sackhoff sneak into the Golden Globe race? It’s not quite as big as any of those would’ve been, but if the Emmys are finally willing to acknowledge the genius of Ronald D. Moore and the awesomeness of seeing the Galactica jump into the atmosphere, it may be as good as it gets.

Battlestar Galactica: Why Boomer is the Final Cylon