The Suite Life of Zack and Cody

Following the successful pilot run of The Suite Life of Zack and Cody spin-off, The Suite Life on Deck, Disney has picked up the tween series for a 13-episode sophomore season.  The sequel series, which is set on a cruise ship with Zack and Cody Martin (Cole and Dylan Sprouse), and London Tipton (Brenda Song) attending a high school-at-sea program, while Mr. Moseby manages the ship, ranks as television’s number 2 program among kids 6 to 11 and is number 3 among tweens.  It is also the number 3 scripted series across all basic cable in total viewers. 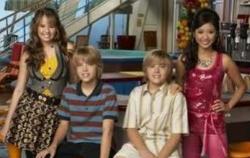 “We’re thrilled with the extraordinary performance of our newest series, The Suite Life on Deck, in the U.S. and globally, and we look forward to telling more great stories with this talented cast and production team,” Gary Marsh, the president of entertainment for Disney Channels Worldwide, said in a statement.

In addition to The Suite Life on Deck, Disney has also ordered six more episodes of its hit live-action series Hannah Montana for the third season, bringing the total order to 30.

Starring teen sensation Miley Cyrus, Hannah Montana follows the adventures of an average teenage school girl named Miley Stewart who lives a double life as a famous pop singer named Hannah Montana by night.  The series ranked as the number one basic cable series among kids 6 to 11 and tweens 9 to 14 for this year’s fourth quarter and is the number one scripted series in total viewers.

“The talent behind Hannah Montana has made it a true global sensation and cultural icon not just on television, where it topped the ratings on Disney Channels around the globe, but as a chart-topping music act and beyond. It has become part of the global cultural lexicon for kids, parents and families everywhere,” Marsh said.