Dancing with the Stars and Wardrobe Malfunctions: A Conspiracy Theory

During last season, Monique Coleman also suffered a slight wardrobe malfunction. There have been many other close calls as well as outfits, worn by both the stars and the dancers, which looked to be constantly on the verge of malfunctioning. I am of the belief that not only is this essential to the ratings of Dancing with the Stars but that it is also entirely deliberate. 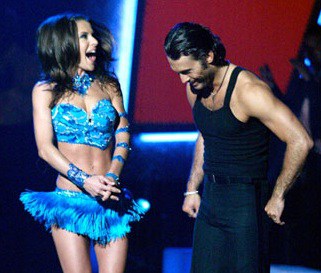 Here’s the situation: You’re an ABC executive. It’s the Summer of 2005. You’ve commissioned and aired a weirdly specific reality show that features ballroom dancing. The breakout star, early on, is the guy who played J. Peterman from Seinfeld. The show has inexplicably received far higher ratings than anyone could’ve hoped. What do you do?

You try to increase the hype and see if the show can actually turn into something. So, maybe you take Kelly Monaco, one of your contestants, and call for a staged wardrobe malfunction. Kelly, after all, is quite attractive and has no problem flaunting her body (she had previously posed for Playboy).

Is this unlikely, that ABC would order a shameless flaunting of skin to help out a show? Of course not.

There are two truths that we need to observe here:

1) The ratings for Dancing with the Stars are inflated significantly by the cleavage of their female dancers. It is naive to think otherwise.

2) Costume designers, in general, know how to clothe women in ways that will keep those clothes from falling off, even when those women are dancing.

How could Kelly Monaco’s malfunction not have been intentional?

What, then, is the result of such a malfunction? If viewers were already watching Dancing with the Stars because of the scantily-clad women, why would that change after Monaco’s incident? Well, first, it brought attention to the mere fact that the female dancers on Dancing with the Stars wear (sometimes ridiculously) revealing outfits. Before the malfunction, most men did not know this. Afterward, when their significant others implored them to watch what first seemed like a silly chick show, they now obeyed.

This is the conscious ramification of the event. The subconscious may be just as important. Now, every time an episode of Dancing with the Stars aired, there was always the chance of another malfunction. Accidental nudity is something the Id craves, and, if the possibility is there for it to occur, we (men) will be drawn to it.

(To be fair, this point may just be a selfish rationalization for the mysterious appeal of Dancing with the Stars. I don’t know why I enjoy watching it. I should probably hate it, yet I watch every episode. Therefore, I create reasons for watching it. Moving on.)

Kelly Monaco’s wardrobe malfunction was the best thing that ever happened to Dancing with the Stars. It increased the already highly-charged sexuality of the dancing and gave the show its first news-worthy story. Without it, Mario Lopez might still be wallowing in relative obscurity. Jerry Springer may not have been able to display his awe-inspiring dancing prowess. Emmitt Smith may not have gotten the opportunity to bestow his plethora of colorful, cut-off tuxedo shirts upon the cloying masses.

So, join me in saying “thank you”. Thank you, Kelly Monaco. Your fallen dress strap has made the world a better place.