‘Criminal Minds’ Recap: Reid Gets in Serious Trouble in Mexico

Criminal Minds kicks off what’s already looking like quite the intense arc for Reid with “Spencer,” and it’s all based around one simple question: How far is Reid willing to go for his mother? The answer? Very. So far, in fact, that he ends up arrested in Mexico, with drugs in his trunk and himself under suspicion for murder. 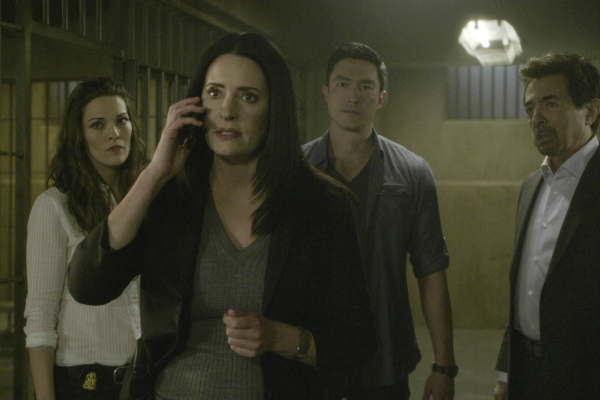 But the rest of the team finding out about those mysterious vials Reid got for his mother is just the beginning, and it’s such an important case for them, that Clara and Simmons (of Criminal Minds: Beyond Borders) fly commercially (that in itself is a big deal, considering their jet) to join Prentiss, Rossi and Luke in Mexico. Meanwhile, J.J., Garcia, Tara and Stephen do what they can back in DC.

This Is Not the Dr. Spencer Reid You Know

The episode begins with a high-speed car chase in Matamoros, Tamaulipas in Mexico, and when the police catch up to one of the cars (the other gets away) and find drugs and money in the trunk, they arrest the driver. The driver is none other than Reid, who cannot be more out of it as he’s processed (mug shots included), to the point that he can’t tell the lead investigator, Casteneda, his name, how his hand was cut or why there were narcotics in his car. He sort of remembers meeting a doctor, Rosa, and they find his FBI badge, so that gets things rolling.

They take hair, nail and blood (which leads to memories of Tobias Hankel) samples to figure out what he’s on, but Reid can’t tell Casteneda much else other than he remembers chasing someone. Who? No idea. When he says he’s being framed, Casteneda asks if he has enemies who would do this. (Oh, does he. And there’s one name at the top of that list.)

Since Scratch has been MIA since targeting Tara, the entire team is thinking he’s probably behind this. What they know for certain is that what would make him risk everything is his mother. Nothing in his arrest report sounds like him: wearing jeans, confused, involved in a high-speed chase (considering he hardly ever drives) and high. He wouldn’t do drugs, not after Tobias Hankel, those who were around back then know (and fill in those who weren’t).

It’s not just the memories of Tobias’ torture that this experience brings back. When Reid’s left alone in a cell, he remembers his father leaving and his younger self telling his mother he’s not weak, which he repeats out loud.

What Was Reid Doing in Mexico?

Not only do they find articles and medical journals about experimental medicine on his desk, the team back in D.C. also discovers that he’s been reading about alternative medical procedures for fighting Alzheimer’s. They’re putting the pieces together.

When Prentiss, Rossi and Luke finally get to Mexico, Reid is still out of it, missing time and not really recognizing Luke or Scratch’s name. He did write Rosa Medina’s name on his arm, so that gives them something to look into, but he’s not yet at a point where they can even try a cognitive. In 2015, 60 holistic doctors died mysteriously — accidents, attacks, suicides — likely targeted by pharmaceutical companies for their work, so it’s possible Rosa’s name is an alias.

Between Garcia narrowing down a list of holistic doctors with connections in both Houston and Mexico and Stephen working on a possible anagram, they find her real name: Nadie Ramos. However, by the time they find her motel room, she’s dead, having been stabbed over 25 times.

When Casteneda questions why Rossi won’t consider the obvious and instead insists Reid has been framed for drugs and murder, Rossi explains, “You wouldn’t either if you knew Spencer Reid.” It looks like the person Reid was chasing was the UnSub and the cut on his hand is from the same blade used to kill Nadie.

But then yet another problem arises: Reid used his personal, not work-issued passport, and has crossed the border three times in the last three months. He violated security protocol; as a federal agent, he’s a high-value target.

When Reid’s blood work comes back, however, they only tested for cocaine and heroin, the drugs found on him. Prentiss orders a full tox screen, specifically looking for Scratch’s scopolamine. Also going to be tested? The vials found in Reid’s bag at the motel, which he waits to tell the others he was giving to his mother until Casteneda has left.

The drugs explain his memory loss and dissociative state, and since he’s coming down, they decide to give a cognitive interview a try. And they need to get something from it, because the local police only care about investigating what will help their case; they don’t care about proving Reid’s been framed.

Reid’s able to remember crossing the border and meeting Nadie in her motel room, as well as first meeting her at the clinic in Houston. She wrote an article on Alzheimer’s. Because Reid’s the most cognizant he’s been, Prentiss has him go through what he remembers, but things are still hazy. He got the vials from her, but then she was upset and someone burst into the room. Reid thinks he was knocked out since he knows he was on the floor at one point, and he knows he was holding the knife, but he can’t say who was stabbing Nadie. When his hands start shaking, Prentiss decides it’s time for a break.

Reid is then charged with the murder of Nadie Ramos, and Rossi has to admit that just looking at the evidence, he’d think he did it. But Rossi knows Reid and heard his cognitive. Still, it doesn’t matter that the team knows Reid didn’t kill her and the cognitive isn’t exactly helping Reid’s case since he can’t say who stabbed her. Then it just gets even worse, as Garcia discovers that Reid’s going to be transferred to El Diablo maximum security by the end of the day.

It Can’t Get Worse…Can It?

Just as Prentiss is going to delete the cognitive interview off her phone, it rings. Clara and Simmons from the IRT have arrived, and they do have some good news. While some of what was in the vials hasn’t been approved by the FDA, there aren’t any illegal substances either. Reid remembers his mother throwing most of them out, so they can assume he was there to get more. He’s at least off the hook for that since there’s no contraband involved. But there are still the planted drug and murder charges that could keep him there a long time.

See also 'Criminal Minds' Recap: No Sun Up in the Sky

Reid still believes he was right to trust Nadie, but why didn’t she give him the vials in the U.S.? One of the ingredients, jimson weed, grows near where her family lives in Mexico. It turns out she has dual citizenship; she works in the U.S. but lives in Mexico with her family. And that’s exactly what they need to get custody of Reid before he can be transferred to El Diablo. Plus, Stephen has made some calls to get him the best legal counsel, so things are sort of looking up. It’s at least looking better than it did at the beginning of the episode.

Before they leave, Casteneda asks for the recording of the cognitive, but Prentiss tells him she didn’t record it because she determined he was under the influence and anything he said wouldn’t have clarified matters.

As for the deal Cruz made for Reid, he can stop by the BAU when they land in D.C., but then they have to take him to federal jail. And prints and samples from the crime scene confirm that a third person was there, so while he’s not out of the woods yet, they’re not going to lose him.

However, once back in the office, as J.J., Garcia and Tara welcome Reid back, Stephen pulls Prentiss aside. Reid’s not eligible for the Bureau’s legal assistance because he wasn’t in Mexico on official business. They’re on their own.

Do you think Reid’s going too far to help his mother? How worried are you about him? Do you think Scratch is definitely behind this?

‘Criminal Minds’ Interview: Daniel Henney on His ‘Seamless’ Transition from ‘Beyond Borders,’ a ‘Morbid’ but ‘Fun’ Story for Simmons and More