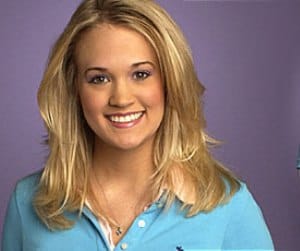 Carrie Underwood is an American singer/songwriter who became a household name after her win on “American Idol.” From “I Told You So” to “All-American Girl” and “Before He Cheats,” her songs consistently find themselves at the top of the Billboard music charts. Want to know about this country music superstar? Here’s a closer look at her journey from “American Idol” contestant to Grammy-winning artist.

Who is Carrie Underwood?

Born on March 10, 1983, in Muskogee, Oklahoma, Carrie Marie Underwood was brought up in Checotah, Oklahoma. She is the youngest of three children. When Carrie was three years old, she started singing at the Free Will Baptist Church and later on for events like Old Settler’s Day and Lion’s Club. In 1996, 13-year-old Carrie was in the process of getting a contract with Capitol Records, but when the recording company’s management changed, the plans fell through. Five years later, Carrie finished her studies at Checotah High School as a salutatorian. She then went on to attend Northeastern State University in Tahlequah. She majored in Mass Communication with a concentration in journalism and graduated magna cum laude in 2006.

In 2004, 21-year-old Underwood auditioned for “American Idol” in St. Louis, Missouri. Her audition song was Bonnie Raitt’s “I Can’t Make You Love Me.” Judges at the time included Randy Jackson, Paula Abdul, and Simon Cowell and the host was Ryan Seacrest. She greatly impressed the judges, and when the clip of her audition aired for the first time on television, many foresaw Carrie as the winner of “American Idol.” Even British judge Simon Cowell, notorious for his brutally honest remarks and criticisms, expressed his belief in Carrie and in her enormous potential to win the competition.

Underwood credits a lot of her influences from the country music world, including the likes of Martina McBride and Shania Twain. She pulled from their discography and others, with her spectacular renditions of “Independence Day,” “When God Fearin’ Women Get the Blues,” “Bless the Broken Road,” “Man, I Feel Like a Woman” and “Inside Your Heaven.”

The finals aired on May 24 and 25 of 2005. Season four came down to Bo Bice and Carrie Underwood, with Underwood being crowned the American Idol winner. She performed “Inside Your Heaven,” which would be her debut single she’d release as the winner. Popular singles from the entertainer include, “Jesus, Take the Wheel,” “Undo It,” “Before He Cheats,” “Blown Away,” “So Small,” “Cowboy Casanova,” “Southbound,” “Church Bells,” “If I Didn’t Love You,” and “Something in the Water.” Previous collaborators and duets include Luke Bryan, Keith Urban, Jason Aldean, and Miranda Lambert.

In regard to her personal life, Underwood has been married to NHL player Mike Fisher since 2010 and they currently reside in Nashville, Tennessee, with their two children.

Stay up to date on “American Idol” with BuddyTV

Want to stay in the know about Carrie Underwood? Use BuddyTV to find out about her latest TV performances of new music and new songs as well as the latest news on American Idol.