Is all this Office casting news making your head spin yet? Well, screw it back on tight, because there’s more speculation to be had … right now: 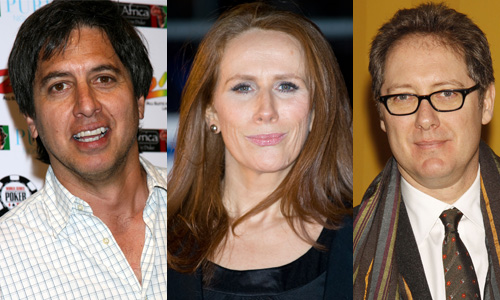 TVLine reports that Ray Romano, British actress Catherine Tate and the great James Spader (Boston Legal) will all appear in the Office season 7 finale, which already boasts guests Will Arnett and Ricky Gervais.

Ausiello suggests that these three could be on the shortlist as Steve Carell replacements, but Mindy Kaling’s recent tweets tell a different story: The Office writer/Kelly Kapoor says Arnett will play the Scranton Strangler, while Spader will play his public defender. It’s possible Kaling could be misdirecting us, but since she also joked about how Spader and Arnett would share a “Secretary”-like storyline, the Strangler reveal sounds more legit. It at least sounds like more exciting casting than a room full of comedy-heavyweights all vying for one little regional manager gig.

That leaves Tate, who’s less known in the States but is known as one hell of a hilarious actress across the pond, and Romano, who’s currently occupied on Men of a Certain Age. Tate seems the more viable Carell-replacement, with plenty of workplace comedy practice from her series, The Catherine Tate Show, on which she plays a variety of characters, like Kate, the guessing-game coworker from hell:

One thing I know for sure: As far as both actors and actual foodstuffs go, a Romano-Tate-Spader sounds like one really delicious sandwich.

The hour-long Office season 7 finale airs on May 19. But before we get there, we’ve got Deangelo Vickars to deal with. I mean laugh with.