Mila Kunis, who gives life to Meg Griffin in the animated series Family Guy, has grown to love her character, whom she has represented for more than seven years now. 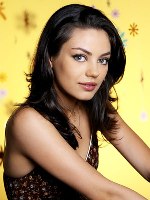 "She's the scapegoat," Kunis described her cartoon character.  "Meg gets picked on a lot.  But it's funny.  It's like the middle child.  She is constantly in the state of being an awkward 14-year-old, when you're kind of going through puberty and what-not.  She's just in perpetual mode of humiliation.  And it's fun."

Following her notable exposure on That ‘70s Show, the 24-year-old actress never envisioned herself doing voiceover work for an animated series that would turn out to be a cornerstone of her career.

"I have a very recognizable voice to say the least, very high-pitched and piercing and loud, and I'm very well aware of it," she said.  "A lot of times people don't necessarily recognize me, but the second they hear me speak, that's when they put two and two together.  Doing voice-overs is not something I predicted or thought I was going to be doing for eight years.  You take it one day at a time and see what happens.  But I'm very proud of Family Guy."

Apart from Family Guy, which premiered its new season last Sunday, Kunis has been preoccupied with filming a Judd Apatow comedy called Forgetting Sarah Marshall, due to be in theaters some time in 2008.

"It's the same people who did Knocked Up and Superbad and The 40-Year-Old Virgin," Kunis said.
"Have you seen a Judd Apatow comedy? Did I have any reservations?" Kunis asked playfully. "I'm just going to say, the whole movie's raunchy.”

A Brief History on The Family Guy