Just over a year ago, LOST fans were grappling with the revelations of just what “was inside the hatch.”  A manic, sleep deprived Scotsman with a proclivity for button pushing, some old music, a lava lamp, and a busted Apple II wired to a bank of ancient tape drives.  LOST fans had waited all summer for the hatch’s secrets to be revealed, and three episodes in they were still wrestling with the unlikely combination of sixties styling and steam punkish technology.  Thankfully, there was a film to explain it all.  The man on that film, Dr. Marvin Candle, would soon become a household name for LOST fans as he narrated to us through a tortured 16mm ‘orientation’ film that gave us a capsule history of LOST‘s now infamous ‘Dharma Initiative’.  We sent our intrepid LOST explorer Jon ‘DocArzt’ Lachonis on a mission to find out the secrets behind the man who breathed life into Dr. Marvin Candle, and cemented himself as part of the LOST legacy, Francois Chau. 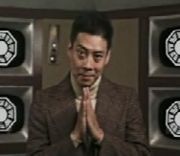 DocArzt: How did you get the part of Dr. Marvin Candle?

The audition notice was sent out to all the agencies. My agent scheduled a time for me to go in and read for it. I had known April Webster, the casting director for years. She had cast me in a bunch of other projects. I went in, did my thing, and thankfully got the part.

Where were the various Candle/Wickmund segments filmed?

The first couple of segments were filmed in Burbank, on the set of “Alias,” which was still in production. We came in and shot the segments using the “Alias” crew after they were finished with their stuff. Beginning with the “Wickmund” segment, the rest were shot in Hawaii. I don’t think I have to tell you how happy I was about this!

Originally Dr. Candle was credited as being played by ‘himself’!  How did that come about?

This “uncredited” role has turned into something quite unexpected. When an actor is offered a part, the agents and the producers negotiate for the actor’s salary and billing. This is pretty routine stuff. For whatever reason, I guess they couldn’t come to an agreement about my billing, so we decided to go “uncredited.” This is also something that is routinely done. This seems to have added to the mystery of “Dr. Candle,” so we just kept it this way. I hope this doesn’t take away from the romance and mystery of “Dr. Candle.”

Has becoming this ‘Iconic’ LOST character had any impact on your public life?  Do people approach you seeking that ‘Dharma Initiative’ connection? 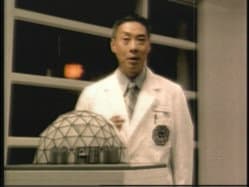 I am amazed at how many people approach me now because they recognize me as “Dr. Candle”. Yes, they always ask about the Dharma Initiative and what’s going to happen next. It’s a worldwide thing. I have been getting lots of letters and e-mail from all over, mostly Europe, but as far away as China, asking for pics and autographs. Even when I’m on the sets of other projects that I’m working on, people are coming up to say, “Oh my God!, you’re the Dharma Initiative guy!”

I just read we’ll be seeing you on the big screen soon.  Care to tell us anything about that?

I have a small part in “The Eye”. It’s a remake of a Chinese horror film. Jessica Alba is the lead. Another film I finished a while back is “Rescue Dawn” with Christian Bale, and directed by Werner Herzog. Not sure when that will open.

We know that Marvin Candle is going to be seen on the island in Episode 20, was it cool to finally be involved in working with some of the other characters?

Yes, Marvin Candle is on the island. Without giving too much away, I can only say that I have yet to have the chance to work with some of the other characters.

Do you have the sense that there will be more Marvin Candle in the future?

I hope that we will see more of “Dr. Candle” in the future, but I really don’t know. It’s wide open as far as the character is concerned. It’s up to the producers to decide if they want to make him more of a major player. The way it’s set up, every fan I’ve spoken to, thinks that “Dr. Candle” is the head guy behind the Dharma Initiative. Who knows?

One of the great things about Candle is he is this very straight, serious sort of guy, just explaining things; yet, he has this eerie quality to him, and when we see he goes by multiple names he becomes ever more suspect.  Were they playing off your nuance and presence, or was Candle conceived as ‘sort of creepy’ from the beginning?

I was never told to play him in any particular way. Like you said, the material is pretty straight forward, so I just added a little layer to him.

The idea that Dr. Candle had a prosthetic arm was in the fan community for a long time before the producers admitted that he did, indeed, have a prosthetic arm.  Did you have to play that scene with a fake hand, or is that just good body work from you?

Ah yes! the prosthetic arm! I was just told, ” Hey, you’ve got a fake arm. Can you just do something, but don’t make it a big thing.” I just have to remember to hold my hand to my side when I’m filming.

So do you watch LOST?

I try to watch when I can, especially the episodes that feature my friend Yunjin.

Without giving anything away, do you think your upcoming LOST episode will hold any surprises as far as Dr. Candle is concerned?  Is Marvin Candle’s story finished?

Well, without being coy, it’s not a surprise to me! I don’t think the Marvin Candle story is finished, but that might be just wishful thinking on my part.