‘Grey’s Anatomy’ Recap: Nothing Says ‘I Love You’ Like Asking for a Divorce

To quote Callie, "That came out a little stronger than I intended" but it's true nonetheless. In the latest installment of Grey's Anatomy, "I Was Made For Lovin' You," just when I thought I had seen it all, I had not. Let's dive in!

The Old Bait and Switch

From the moment the promo monkeys trumpeted April's possible pregnancy, I was sure she would not be pregnant and, indeed, she was not. Unfortunately, April was a little too relieved when it turned out she was just late. And Jackson finally decided he had had enough and called things off. But is it really over? Nope. I think not.

As for the "bombshell" promised by those same promo monkeys? I was equally certain that Meredith (she of the hostile uterus) would be pregnant. And with that, the screams of a thousand MerDer fans were heard around the world. Is this a happy development? Sure. Babies are happy news. But it wasn't a surprise. Sorry.

There Will Be No Mints

Miranda Bailey already had one wedding, so she's in no mood to make the second time around a splashy affair. Too bad her intended, cutie patootie anesthesiologist-turned-surgical-intern Ben Warren, has other ideas. Happily, by the end of the episode, Bailey had a change of heart and decided that it might not be so bad if Webber gave her a waffle iron.

I Don't Have a Left Foot

I was Arizona's first day back at work. Other than the intern stalking her with chairs all day, things went pretty well. Until she fell. But even that wasn't so bad as Arizona laughed it off. Then she went home and started to cook dinner and played with Sofia. Clearly, things are looking up for both for Arizona and Calzona.

Things Happen For a Reason

So said the guy who finally got a liver only to have his body reject it denying him the life he wants with his partner. This tragic tale was the Patient Parallel of the Week for Cristina who realized that she wants a life with Owen.

Too bad Owen has just realized that he's going to have to divorce Cristina in order to protect her. Yes, you read that right. Turns out Owen was inadvertently and indirectly responsible for the plane crashing (don't ask, I really don't have the patience or the stomach to go into detail here) and since he's married to a plantiff, the hospital figures the lawsuit will be thrown out. But not if they're divorced! See where this is going? Noble Owen is planning to turn the tables on them but he can't tell Cristina the truth because he signed a confidentiality agreement. Argh!!!!!

Twisting in the Wind

That's what it feels like to be a Cristina/Owen fan. I bear MerDer and Calzona fans no ill will. Ecstatic that Meredith is pregnant? Great! Delighted that Arizona is bouncing back? Good for you! But is a little happiness for Cristina and Owen too much to ask? They have suffered for so long and in so many ways that I've almost lost count, but let's make a list anyway. Ready? Go!

Owen's PTSD, Cristina's focus on her career to the exclusion of all else, Faux Triangle of Doom with Teddy, Owen's PTSD flare-up, Cristina's PTSD Round 1 (following the Shooter in the Hospital), Cristina's pregnancy and subsequent abortion, endless communication issues (including ignoring the aforementioned abortion, burying their problems with sex, and hoping the fact that he wants kids and she doesn't will magically disappear), catastrophic marriage counseling, Owen's one-night stand, Cristina's PTSD Round 2 (following the Plane Crash), Cristina leaves Owen to do her fellowship in Minnesota cutting off all contact with him and getting it on with her icky "sex friend", and now Cristina returns and realizes that she has changed and wants her husband back but doesn't articulate that to Owen before he says he wants a divorce (because he loves her enough to divorce her for the greater good). Did I miss anything?

I get that this is a drama. And that there need to be stories. And that "happy couples" are fantastic in real life but pretty boring on TV. Having said that, CO fans are so beaten down and exhausted and weary of it all, we need help and hope. Stat. There. I said it. In the name of all that is right, Shonda Rhimes, put Cristina and Owen back together again! 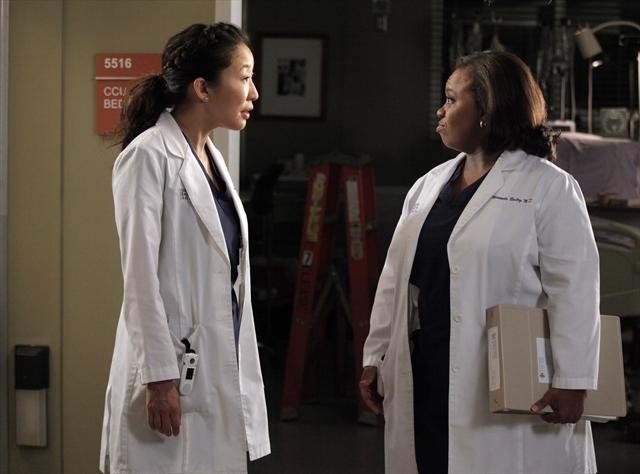 BuddyTV is your source for Grey's Anatomy news and information

Stay up to date on the latest from Grey's Anatomy including show recaps, news, and actor information on BuddyTV. See Everything You Need To Know About Grey's Anatomy for a complete guide on the show.