‘Dancing with the Stars’ Recap: Semifinals and the Trio Dances

We’re one week away from the finale of Dancing with the Stars season 23, so everything is on the line for the five remaining couples. It’s the Semifinals, which means two performances from each pair including the Trio Challenge with an extra pro. 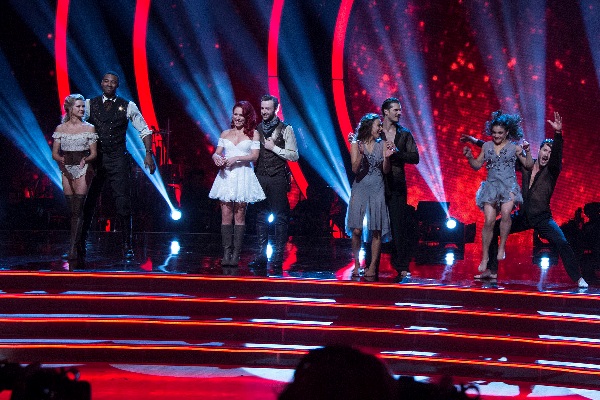 However, one couple will fail to make it to the finale and be denied the opportunity to perform a Freestyle routine. With Laurie and Jana both getting double-perfect scores last week, odds are good that Terra or one of the two remaining male stars will be going home tonight.

We’re starting with the individual routines before the Trio dances, and Sharna is back! And we get full segments about everyone’s backstories.

Aww, a home movie of James as a little boy is so damn adorable. His story is about always fighting to drive race cars, not letting anything stop him. Sharna is dancing blindfolded because it worked for Bindi and Nyle. The routine is debonair and smoldering, the perfect blend of danger and sensuality. It’s so damn good to have her back because you can feel the chemistry between this two. The judges are in love with the control and the dynamics that set it apart from the usual Argentine Tangos. Carrie Ann Inaba saw some wobbles in the beginning.

Shame on you, Carrie.

Her parents were both average-sized and they adopted a little person as a brother for Terra. Her mom is so sweet and classic. She kind of reminds me of the wife in that American Gothic painting. Terra moved to L.A. to be a singer and a star because that was her dream and nothing will stop her. The concept is powerful and inspirational, starting out with Terra being ignored by all the pretty people until Sasha arrives to show her that she’s beautiful. It’s a sweet and tender dance, though there seem to be one or two points where it slows down a bit. Carrie Ann cries and the judges praise the quality of her movement and that she did more than she usually does.

She joins the other four couples in the Semifinals in getting a perfect score.

Her dad was in a lot of bands and she was a figure skater when she was younger. Her story is full of very bad relationships and this show has helped to unbreak her. For some reason, the dance takes place in a shoe store. It has a lot of content and somehow these two can make any style look sexy. There’s a little bit of a rough start, but then it really gets going. I think her long dress is too problematic and makes her legs and kicks more difficult. The judges love how proper it was.

I think I know who’s finishing in fourth place. And obviously, someone stole all of Bruno’s paddles except for the 10.

He comes from a loving family that always enforced sports AND a good education. He left football early because he didn’t want to stay too long and get injured. It’s a rocking Tango with tons of attack. I love how aggressive it is, with some high kicks from Calvin. But there was a little slip as they got too close to the audience, possibly on her dress. The judges love the power, but it got away from him with a few stumbles. Carrie Ann didn’t like the weird opening with hands grabbing them, and I agree, it didn’t work. And he kind of overpowered Lindsay.

Holy crap, I didn’t think 8 paddles existed in the Semifinals. Maybe Jana doesn’t have fourth place locked up like I thought.

Her story is all about her family’s group sacrifice to help her become an elite gymnast. Following your dreams is definitely the theme of this week. Laurie loves her grandma, who has Alzheimer’s which makes her tear up. And the day after that interview, Laurie’s sweet grandmother passed away. AWWWWWWW! Heart = Broken.

See also 'American Idol' vs. 'The X Factor': Who Sang 'Say Something' Better?

Following that powerful video segment, the fact that Laurie comes out and absolutely kills this dance is amazing. She’s such a remarkable powerhouse. Everyone is overcome with emotion and it’s all perfect. Sorry Hinch, but Laurie just won the Mirror Ball.

And now Val has more individual-perfect routines than Mark Ballas, putting him second overall among the pros.

Finally, another perfect score for Hinch.

Terra is happy to have Artem around because he’s hot and Sasha is like her brother. Damn, her flirt game is strong. I didn’t expect this routine to be so darn hot, but it was. Terra was like a madam controlling her two sexual playthings, and it all worked very well. The judges love the choreography because it beautifully framed Terra and made her the center of attention at all times. She really has come a long way from that terrible Paso that lacked aggression.

It’s always nice to see some Alan. Jana has a killer attitude that really works, but it doesn’t resemble a Paso that much to me. Still, it’s very gritty and passionate and exciting, with Bruno calling her a She-Devil. The highlight is probably the puffy shirts for the guys.

I see we’re giving away 10s for free now.

Lindsay and Witney are adorably goofy and silly the whole time in rehearsals. Once again, I demand a reality show for these two. Or at least a DWTS web series. WOW! Sure, some of the movements are a little sloppy and it’s not totally in sync, but that one double lift was AMAZING. He lifts both girls, one on his back and one on his front, and spins them around as they hold onto each others legs. It’s fun, exciting, and over the top.

See also 'Dancing with the Stars' Recap: Spring Break and the Team Dances

These judges have gone mad. We need Len Goodman back more than ever.

This is all about the Chmerkovskiys, with Maks playing the coach who teaches the other two since he originally did teach his younger brother. The story is interesting, but it doesn’t really feel like a Trio Dance at all. Laurie and Val are dancing and Maks is just watching over them. Obviously, the dancing is stellar and I enjoy the little play they performed, but I wasn’t as wild about it as the judges are. The judges seem to really like how inside-ballroom the concept was.

OK, so 7 out of tonight’s 10 dances were perfect, apparently.

However, only four couples will move on to the finale.

They did great and went out on top, but remember that these results are based on last week when they weren’t so good. It would’ve been nice to see them do a Freestyle, but I can’t really argue with any of the four couples heading to the finale. I’m sure Sasha will make it there someday.

The Dancing with the Stars two-night finale airs Monday at 8/7c and Tuesday at 9/8c on ABC.